How to Eliminate Styrofoam Cups in Your Enterprise

in Best Practices, Recycling, Resources, Sustainability, Waste - on 11:54 AM - No comments


I don’t know about you, but styrofoam cups make me a little crazy.  Everytime I use one I think, “Wow, that’s going to sit in a landfill for a looooong time.”  So when I started working with Cynthia Curtis, who was the Chief Sustainability Officer of CA Technologies at the time, and realized how many styrofoam cups they  were still using in cafeterias and break rooms, it came as no surprise that getting rid of them was a priority for her.  And she wasn’t alone. 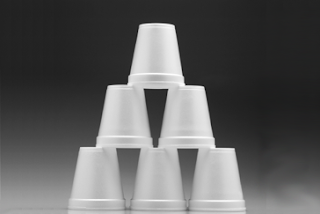 When CA distributed an employee survey to judge reaction to potential sustainability projects, eliminating styrofoam cups was a very close #2 in North America (where the vast majority of styrofoam was being used).  Seems like an easy project, right?  Not so fast.  Although the sustainability team worked hard to plan effectively and the project was ultimately a success, they hit some bumps in the road along the way.   Here’s how they did it, some (painful) lessons learned and, ultimately, some pretty impressive results.

Strategy for Eliminating Styrofoam Cups in the Enterprise

The goal was to eliminate use of styrofoam cups entirely in North America, the region with the greatest use.  The initial discussion among stakeholders and employees were so positive that it was  decided to expand the scope and use this as an opportunity to eliminate all disposable cups.  A tall (or potentially Venti) order.  To accomplish this, the company planned to:

Launch - The Beginning of the End for Styrofoam

Making sure that employees were prepared for this shift required careful planning.  It just so happened  CA was going through a re-branding exercise at the time and were able to work with marketing to coordinate efforts.  The CA Technologies coffee mug actually became an important part of the internal re-branding effort and each cup came with one of CA’s four core principles printed on it.
They also included the news in departmental newsletters, published blog posts, put signage in place and distributed details with the mugs as they were distributed.  You can’t over communicate on this.  Everyone loves their morning cup of coffee and you are bound to ruffle some feathers when you change their daily rituals.

In order to deploy the reusable cup strategy, and eliminate styrofoam from all locations, Cynthia worked hand-in-hand with the facility management team as they are responsible for stocking pantries and cafeteria management at our locations.  With their help CA made sure there were extra mugs and tumblers available at all locations, clear signage was put in place describing the effort and employees responsibilities, and that all disposable cups were taken out of circulation.

Almost 36 Sears Towers.
That’s how tall the 1.236 million styrofoam cups that CA did not used in the first 10 months of this initiative would reach if they were stacked one on top of another.  CA also eliminated over 2070kg of waste that would otherwise go to a landfill (it would be a lot more, but styrofoam is wicked light!).  Finally, they’ve eliminated that nagging voice in the back of your head reminding you that the styrofoam cup you just threw out is going to be around for another million years.
Categories:  Facilities, employee engagement, materials reduction