in Buildings, Carbon Reduction, Facilities, Waste, Water - on 12:07 PM - No comments
Are you taking fire risk into your carbon mitigation plans?  If you're not, you should be, and you should be really appreciating your fire extinguishers about now.  Just how important to society are fire extinguishers?  It turns out very!  Often ignored,  even by the fire community, these overlooked life safety devices play a vital role in keeping us safe.  It is time for fire extinguishers to get the respect they deserve.

For most people fire extinguishers are invisible red cans on walls,  never looked at,  rarely considered.  To some they are the joke in a funny story about cooling beer in college or the laugh from the time they shot one off that drunken night.  But in more than 600 businesses and non-residential structures every day in America they are the difference between a minor fire problem and a conflagration. 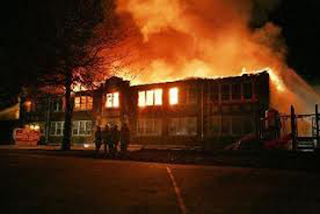 Yes, you read that right, 600 time a day fire extinguishers put out fires in non-residential structures in the United States and many more around the globe.

Here are the facts

According to recent NFPA (National Fire Protection Association) data, in 2012 U.S. fire departments responded to an estimated 1,451,500 fires.  These fires resulted in 3,320 civilian fire fatalities, 16,705 civilian fire injuries and an estimated $15,478,000,000 in direct property loss.
Of these fires 112,000 were responded to in commercial or municipal buildings.  Of the over $15 Billion in property damage, more than $3.811 Billion took place in these non-residential structures.  This represents an average loss per reported incident in non-residential / commercial structures of over $34,000.
These facts, pure and simple, don’t tell the story of the true value of fire extinguishers to our society.

The Vital Role of Fire Extinguishers

To highlight the effectiveness of extinguishers in the early stage fire fighting, a 2002 UK study performed by FETA (Fire Extinguishing Trades Association) and IFEDA (Independent Fire Engineering and Distributors Association) reviewed over 2100 fire incidents and found that in 80% of the cases a portable fire extinguisher successfully extinguished the fire and in 75% of those cases, the fire department was not required to attend.

A similar survey was conducted in 2002 by EUROFEU (European Committee of the Manufacturers of Fire Protection Equipment and Fire Fighting Vehicles) in 6 European countries and it found strikingly consistent results.  In over 2600 incidents recorded it concluded that in 81.5% of cases the portable extinguisher successfully extinguished the fire and in 74.6% of the cases the fire department was not required to attend.

Extrapolating the results of these surveys to the U.S. market provides solid statistical evidence that in approximately 80% of all fire incidents a portable fire extinguisher is the only fire fighting tool needed to extinguish the fire.  Further, they indicate that in 60% of all fire incidents the fire department is not notified (and thus the event would not  appear in NFPA statistics).  If applied to the 2008  NFPA data, fire extinguishers effectively managed approximately 224,000 fires in commercial structures in the U.S., 168,000 of which do not appear in NFPA statistics.

Fire extinguishers also play a critical role in protecting the environment by controlling fires at their very early stages.  According to a 2010 White Paper from Green Collar Research, a leading sustainability on-line research organization:

From a safety as well as from an environmental and carbon release perspective, the management of a fire with a fire extinguisher when it is in its very early stages is a best case scenario.
Green Collar Research sums up the beneficial role that fire extinguishers, and particularly electronically monitored fire extinguishers like those offered by en-Gauge, in the following manner.

Fire and fire protection plays a significant role in releasing greenhouse gases into the atmosphere.  Fire extinguishers play a crucial role in protecting the environment due to their proven ability to fight fires while they are at their very early stages.  They can mean the difference between a few pounds of carbon being released, or thousands of tons in a single fire event.  The availability of accessible and working fire extinguishers assures that the highest possible percentage of fires will be controlled with the minimal environmental impact possible.

It is important to note that a single fire event can undo years of progress in carbon reduction programs inside a business.
Replacing the inefficient and carbon-intensive manual extinguisher inspection methodology with electronically monitored extinguishers will have significant positive impacts on the environment, including: